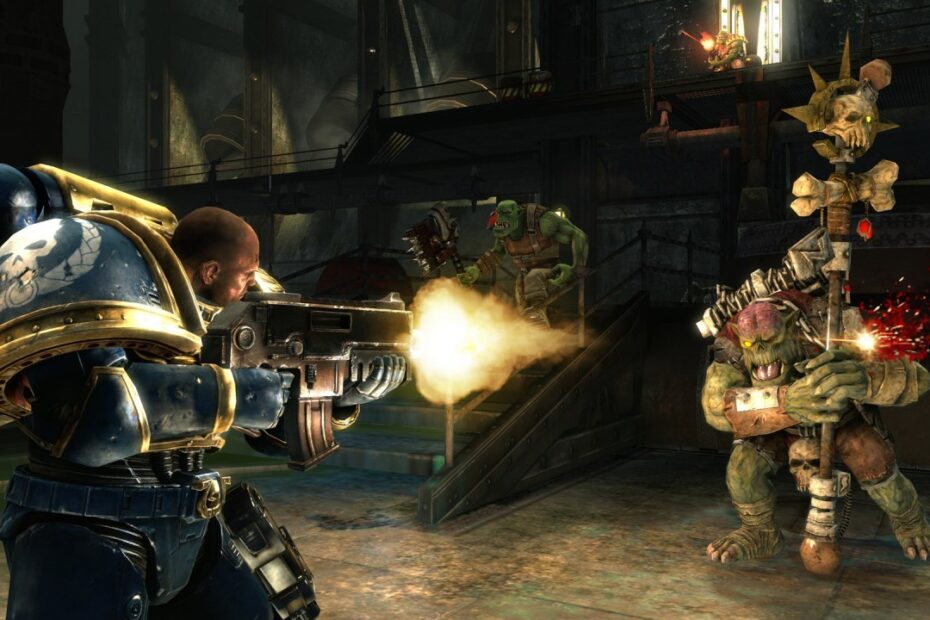 The Warhammer 40.000: Space Marine advertising campaign tried to convince everyone of the coming of the new GoW, but only a sad dwarf came out of the closet in his underpants.

Games Workshop’s The Warhammer 40,000 universe has dozens of fans who come to tremble at the mere mention of armor-clad orcs, humans in a global religious sect, evil Chaos gods, and robots who dream of feeding the stars of the galaxy to unknowable dark entities. So it should come as no surprise that in Warhammer 40.000: Space Marine a group of marines are trying to single-handedly defeat an army of alien orcs on a giant garbage planet. A protagonist named Titus and his team try to conquer new territories for their emperor, but a planet with monotonous landscapes and dreary scenery hardly looks so appealing even to an intergalactic sect. The story of the universe is built through dialogues between the characters, but not for a fan of the setting, it all sounds like outright nonsense, fueled by pointless shouts from the enemy.

In mechanics, Warhammer 40.000: Space Marine is very reminiscent of Gears of War with minimal use of cover. Trained heroes deftly mow down waves of goblins and orcs, moving with pathos along a linear route from point to point of episodic narrative. However, unlike GeoW, the game balance shifts towards quick melee battles with rivers of blood and infernal squeals in the spirit of another game, but with the same acronym – GoW (God Of War). And it’s not just the speed of enemy destruction – the characters’ health is restored only through a special tearing the enemy apart attack, and the regenerating shield is almost always not enough for a wave attack. Therefore, at rare moments, the game takes on a tactical element. You must decide to run out into a mob of frenzied orcs for health, or wait out a few more waves of the enemy, shooting them from cover with minimal life. In addition, melee ferocity allows you to activate a special mode when the hero goes on a rampage, inflicting maximum damage on the enemy. Grenades, cannons, and even a mortar against a backdrop of bloody sawing leaves the most average impression.

The monotonous gameplay takes on depth when a rocket launcher comes into your possession, but as soon as you start enjoying the game, it is immediately taken away. It’s that sense of anticipation that accompanies the game from start to finish with the rare patches of really cool gameplay. Defending a train, a destroyed bridge, and a jetpack are all that can be remembered from 8 hours of full game play. The rest is “Horde” mode with little quirks like health regeneration and jetpack flying. It is funny that the multiplayer mode is deprived of the game’s main feature – waves, concentrating on defmatch.

Warhammer 40.000: Space Marine is a product designed exclusively for fans of the original universe, who will see deep meaning in the numerous dialogues, and in the repetitive actions grand battles between the forces of good and evil. For everyone else, Warhammer 40.000: Space Marine is a strange action game that looks like a mixture of two GoWs with monotonous mechanics and a completely failed ending.