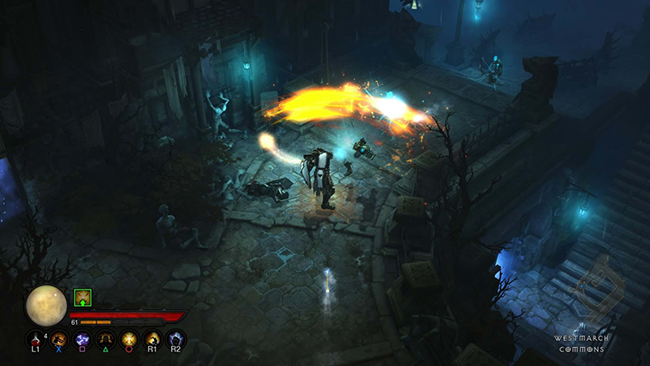 The Ultimate Evil Edition is a great example of how Blizzard Entertainment works on their games after release. Having played the original Diablo III on PC for 200 hours, we sat down for the PS4 and Xbox One versions with the certainty that we shouldn’t expect too many surprises from the fresh release – just a new class and a new chapter. But as it turns out, the re-release didn’t stop there. The game has been redesigned, and many of the flaws have been corrected.

The first change we found was the difficulty. It can be switched as the game progresses, while the total number of customization options has also increased. Each of these offers certain bonuses in the form of increased percentage of experience, gold, and other things. This approach allows you to choose the style of passing. Fast pumping in harsh conditions or slow and unhurried study of the game. “Expert” difficulty (the highest available immediately) at first intimidated hardcore, but after discovering some skills, truly tense moments became much less.

The new Crusader class turned out to be the most fun character available in Ultimate Evil Edition. He’s perfect for holding off large crowds of enemies. Most of his skills are aimed at hitting multiple targets at once, with many of the blows hitting the area around the hero. While unleashing the full force of his “righteous wrath” on his enemies, the crusader can also heal himself and his allies. This is the kind of classic “paladin tank” present in many role-playing games. And although, compared to the other characters, he hardly boasts the most damage, his ability to withstand a crowd of enemies under a hail of blows allows him to survive in almost any battle, including with bosses.

When using one of his passive skills called “Impenetrable Armor”, in case of depletion of the life line, the character does not die, but becomes invulnerable for 5 seconds, as well as getting a bonus to the attack power and replenishing his health with each killed enemy. Often there are packs of small monsters that surround the crusader, do not give him a pass. They are beautifully dispersed by a powerful wave of light, and those who survive the attack are killed by sacred flames from the bowels of the earth!

The colorfulness and variety of his attacks, coupled with the dynamics and animation of enemies flying in all directions, make you feel like you’re playing a slasher rather than classic Diablo, which is great, of course.

Part of the effect is due to the kill chain bonuses and controls. Many players were worried about the console version. As it turned out, it was in vain – to play with a gamepad is even more convenient than on the keyboard with a mouse. Everything is done quite competently and does not cause any discomfort. All active skills are placed on separate buttons, which are shown directly on the screen, so there are no questions and confusion. The PS4 touchpad is used as a button to call up the clothing and skill menus. Pressing on the right side opens a window with skills, the left side opens a window with inventory. The inventory itself is very conveniently divided into categories, which can be selected by a circular motion of the left stick. One of the most distinctive features of the console versions of Diablo III is the ability for characters to sharply bounce or roll over to the side indicated by the right stick. This allows you to avoid long-range attacks or quickly retreat to safety.

In Diablo, obtaining new armor and weapons has always played a key role, but the original third part had serious problems with it, so the developers redesigned this aspect and called their innovation “Loot 2.0 system. It used to be very annoying when playing, for example, as a demon hunter, a crossbow fell out with a high bonus to “Strength” instead of “Dexterity”. Now, items are determined by the needs of the class, not by random selection. This makes it easier to get the necessary items to build a particular build.

Another major change from the last console version is the physics. The environment reacts much more strongly to your actions, colorfully demonstrating its interactivity flying debris and interior details, which spectacularly shatter, wiggle and all sorts of reminders about themselves during the use of spells or brute force. Moreover, they do not disappear, but continue to remain at the level, making the game world feels more natural.

Diablo III’s storyline is also changing. Even when playing on normal difficulty level more types of enemies will be coming at you than before. This approach has really enriched and diversified the original campaign. It’s a lot more fun to play.

The new chapter of Reaper of Souls, which tells the story of the soul reaper, starts right after we take out the main enemy and put him in the “dark soul stone” [SPOILER-SPOILER Diablo gets killed at the end!] Our hero is sent to the town of Westmarsh to defeat this very reaper. The design of the locations is in the style of a 19th century European town. The streets are paved with stone, lampposts in the Gothic style and lots of streets, stairs, and houses to enter. Everything looks very nice and beautiful, despite the chaos and horror going on around.

In addition to the town, the fifth chapter conceals new dungeons and new enemies. Westmarsh turned out to be probably the best location in the game, and it’s even a bit of a shame that you have to run through dungeons and graveyards most of the time.

In one of the first quests, just in the town cemetery, you have to rescue the gypsy girl Maryam. Bringing her to town and gilding her pen, we discovered another innovation. The gypsy has the ability to enchant objects, changing their properties or appearance. Thus, if you do not like some additional characteristics and appearance, for example, some helmet, you can easily change them. This allows you to more accurately customize your character to the situation.

Players are used to the fact that after completing the last chapter you can start all over again and play for a new level and items of equipment. This approach was able to quickly get bored, so this aspect was redesigned. After completing the story unlocks the Adventure mode, which will also be available for the newly created characters. This mode is a randomly generated quests that are located all over the map of the selected act. There is also a new merchant in the player’s camp, who sells random items for bloody shards received during quests. In the end, it all allows you to diversify the gameplay, causing you to continue playing not just for a new level, but by completing various quests, which in some places even reveal more interesting details about the world of Diablo.

Diablo III: Ultimate Evil Edition is a really ultimated version of the game which fixes all the serious flaws of the original (except for the cliched storyline) and adds a lot of new interesting features which makes the game better.